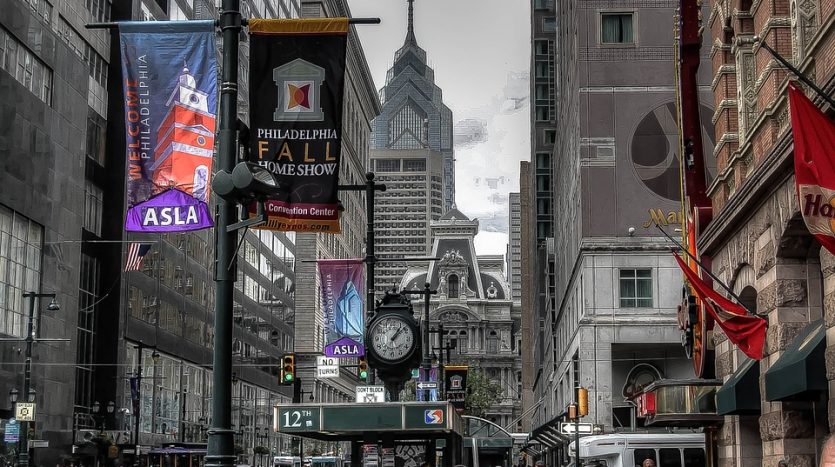 There is a reason why Philadelphia was recently named the number one U.S. destination to visit in 2016. From its fantastic museums to soaring skyscrapers to historic alleys, there’s a lot more to this gritty city than just cheesesteaks and beer. But with so many great things to do and see, it can be overwhelming trying to figure out where to start.

1: Dilworth Park
Dilworth Park is the upgraded plaza in front of City Hall. Kids will be entertained by the water fountain, there’s coffee and the occasional happy hour for adults (or for fitness fanatics, free workouts nearly every afternoon), and you can take a picture in front of the LOVE sculpture, which is camped out here while LOVE Park undergoes renovations.

2: One Liberty Observation Deck
Need to get your bearings around this city? Ride the escalator up 57 floors to the top of One Liberty for a 360-degree views. The observation deck just opened last year.

3: Wanamaker Building
Home to the largest pipe organ in the world, the Italian Renaissance style Wanamaker Building puts on three free organ concerts a week. There’s also an art gallery on the seventh floor of the building, which was built in 1911.

4: Kimmel Center for the Performing Arts
You can tour this stunning domed performance arts center on Broad Street for free each day of the week. Want a more in-depth look into the Rafael Vinoly-designed building? Architectural tours are every Saturday at 10:30 a.m.

5: Comcast Center
This skyscraper currently stands at the tallest, green building in Philly—until 2017, when the Comcast Innovation and Technology Center opens next door at 1,121 feet. Designed by Robert M. Stern, the Comcast Center features a public plaza and a 2,000-square-foot LED screen in the public lobby. Restaurants and retail are on the lower level.

6: Independence National Historical Park
This is a must-see for history buffs. This historic building is listed as a World Heritage Site and played a big role in Philly’s recent designation as a World Heritage City. Across the street: The Liberty Bell and National Constitution Center.

7: Franklin Court
Now’s the time to check out the Robert Venturi- and Denise Scott Brown-designed Franklin Court. It’s technically inside the Independence National Historical Park and features ghost structures of Benjamin Franklin’s home and print shop. It’s free for everyone.

8: Elfreth’s Alley Museum
No trip to Philadelphia is complete without a trip down America’s oldest continuously inhabited residential street. There are 32 homes along the alley built from 1728 to 1836 and more than 3,000 people have lived in them over the years.

9: The Barnes in Philadelphia
The astounding post-impressionist and modern art collection of scientist Albert Barnes is housed in this Tod Williams Billie Tsein Architects-designed museum. A Picasso exhibition is on display until May 9. Freebie alert: The Barnes is free on the first Sunday of each month.

10: Boathouse Row
One of the most iconic row of homes in Philadelphia is Boathouse Row, a series of—you guessed it—boathouses that serve local rowing teams in the city. This spring marks peak rowing season, including the May 13-15 Aberdeen Dad Vail Regatta, the largest collegiate regatta in the U.S. You can get a nice view of the boathouses from Spring Garden Street Bridge.

11: Philadelphia Museum of Art
Whether you go just to run the Rocky Steps or take a tour of the museum, this spot is a must. The International Pop exhibit explores 150 works by artists like Andy Warhol, Roy Lichtenstein, and more until May 15. On April 15, the exhibit Creative Africa will be on display. Discount alert: The art museum is pay-what-you-wish every first Sunday of the month and after hours on Wednesdays.

12 The Logan
The former Four Seasons Hotel is now the Logan, a 391-room luxury hotel that features an impressive art collections of nearly 1,800 pieces of local work. The farm-driven steakhouse, the Urban Farmhouse, is on site, too.

13: Rodin Museum
Open since 1929, this pay-what-you-wish museum houses one of the most extensive collections of French sculptor Auguste Rodin, both inside and outside in the OLIN-designed gardens. Fun fact: Every second Saturday of the month the museum hosts sketching classes for adults from 10 a.m. to 12 p.m.

14: Eastern State Penitentiary
During the fall this historic prison turns into a haunted house, but the rest of the year it offers audio-led tours voiced by actor Steve Buscemi. Built in 1829, Al Capone was likely its most famous prisoner—yes, his cell is one of the tour stops.

Read more at philly.curbed.com. This map will be updated regularly, so be sure to check back for new spots.