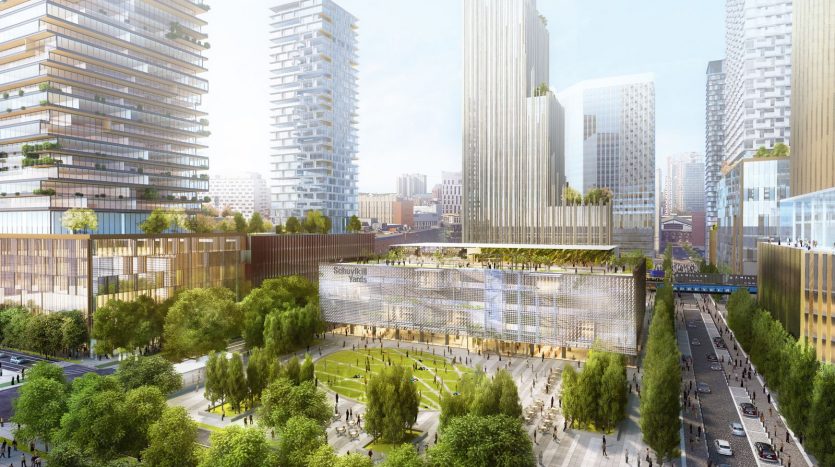 In a flashy press conference this afternoon held in a tent on One Drexel Plaza, Drexel University announced its 20-year plan for Schuylkill Yards, a $3.5 billion and 14-acre project that will aim to transform West Philadelphia into a leading innovation hub of the region.

Drexel president John Fry announced that Brandywine Realty Trust will be the developer of the master plan. The development company has long had a stake in University City as the developers of the Cira Center, the EVO building, and the up-and-coming FMC Tower.

Fry described Schuylkill Yards as a “new neighborhood based on innovation” with “world-class, open space in the tradition of the public square of Philadelphia.”

The master design reveals multiple public spaces, each with their own distinct characteristics. A 1.3-acre plot—currently a parking lot at One Drexel Plaza—will become an elliptical lawn and the center of activity at Schuylkill Yards. NY-based SHOP Architects and West 8 landscape architecture firm have designed the master sites.

Eight new high-rise sites will also be part of Schuylkill Yards, a mix of a laboratories, hotels, retails, residential units, and offices. NY-based Gotham Organization, Inc. will lead the residential development, and Longfellow Real Estate Partners will take on the Life Sciences component.

In addition, the historic Bulletin Building, designed by architect George Howe, will undergo exterior renovations that will include a dynamic front screen along the east facade facing the elliptical green space.

Though the Schuylkill Yards timeline involves a 20-year buildout, it is expected to begin construction as soon as possible—starting with Drexel Park, a 1.3-acre park at 30th and Market Streets later this year.

This is not a corporate campus. It will be a fully-engaged ecosystem.

Fry noted that they will be actively partnering with local businesses and unions, as well as maximize hiring of local residents. It’s expected to create 10,000 construction jobs and 15,000 employees and residents.

“This is a game changer—not just for Philadelphia,” said state Senator Vincent Hughes. “The innovation that happens inside Schuylkill Yards will have an impact internationally.”

Read the full article at philly.curbed.com.