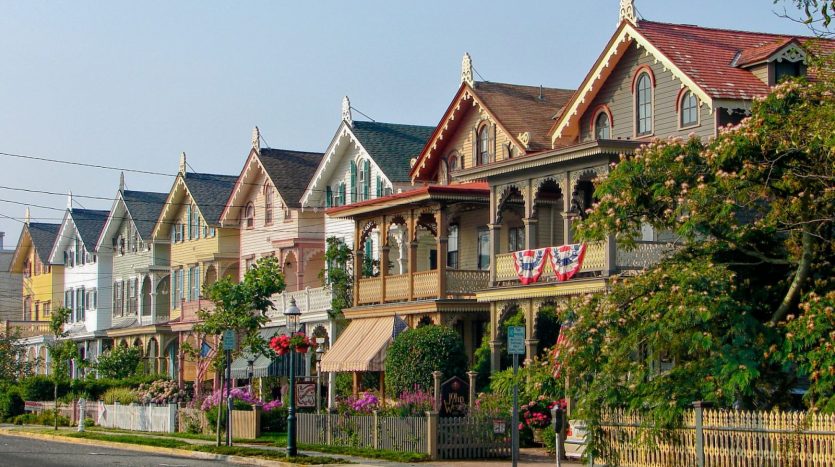 6 Beach Towns To Visit Near Philly This Summer

As Memorial Day approaches and everyone is itching to start their summer travels, we’ve complied a few of our favorite beach towns within about two hours of Philadelphia. From the picture-perfect Cape May in New Jersey to the quiet, but lovely Bethany Beach in Delaware, there’s a little something for the beach bum in all of us.

This beach town was established in 1871 by a New York City broom manufacturer who named the beach after Francis Asbury, the first American bishop for the Methodist church. Since then, Asbury Park has had a long history of being a progressive city, known for its music scene and growing gay community. Like many Jersey shore towns, Asbury Park went through some tough times during the 1980s and 1990s, but in recent years it’s regained its popularity. Plus, the Stone Pony is a must-see for all the Springsteen fans out there.

Affectionately called LBI by locals, Long Beach Island stretches 18 miles and includes six small towns within it. All are worth a visit, but Beach Haven is where you’ll find some remaining historic structures dating back to the 1800s, plus shopping and restaurants.

A shipmate on Henry Hudson’s ship said it best when they set sight on Brigantine in 1601: “This is a very good land to fall in with – a pleasant land to see.” At the time it was a popular fishing spot for the Lenni-Lenape tribe, and the island didn’t really see development until the 1800s. Today, much of the history remains, from the Brigantine lighthouse to the occasional sighting of the many shipwrecks that occurred on this island. Atlantic City is a quick drive from here if you’re looking for some night life.

Ocean City, New Jersey is often considered one of the best family-oriented beaches in the country. It was originally known as Peck’s Island, after fisherman John Peck who used the beach to store freshly caught whales, according to the town’s website. Today, taking a stroll along its 2.5-mile iconic boardwalk is a must. But if you’re craving an ice-cold beer after a long day at the beach, you’ll have to go elsewhere—Ocean City is a dry town.

At the very tip of New Jersey’s shoreline is Cape May, an incredibly charming town that actually burned to the ground in 1878. It wasn’t until after the fire that the beautiful Victorian beach houses were built and remain today as homes and bed and breakfasts. For folks really looking for small-beach charm, note that there are no commercial chains in Cape May. That may be why NJ.com named it the best beach in the state. Try to make a trip to Cape May Point and the lighthouse. If you’re really feeling adventurous, hop on the Cape May-Lewes Ferry, which will shoot you (and your car) over to Delaware’s Lewes Beach in 1.5 hours.

On a good day, you can drive to Bethany Beach from Philly in just over two hours, making it the final and southern-most beach town on this map. It’s one of the more quiet, residential beaches in Delaware, which makes sense given its history: Bethany was first established in 1901 as a seaside meeting place for members of the Christian Church. Aside from the homes, it’s just beach and bay here. But there is a cute shopping area with local shops and a farmers market.